..... was born in Hitchin, Hertfordshire, UK. She became interested in art at an early age has since always worked and developed a career in art. In 1981 Sarah emigrated to Sydney, Australia, where she worked as a freelance and contract Graphic Designer. On returning to the UK, in 1991, she completed a BTEC National Diploma in Graphic Design. In January 2002 she completed both FAETC 7307 Stage 1 and Stage 2, teacher training certificates. Sarah has resumed her study, once again, and is presently in her final year of a BA (hons) Fine Art degree, at Northampton University.

Sarah is a founder member of the Eagle Gallery. She mainly paints in watercolours in a bright, bold style of her own. She also paints in mixed water based media. She has developed a technique of which she has named “Textural Collage”, it is based on textures in the landscape. At present she teaches watercolour painting in the community, adult education, and special needs students. Sarah also does regular painting workshops and demonstrations. These include subjects such as : Colour Mixing Theory and Practice, Tonal Values and Limited Palette, Design and production of your own Greetings Cards. Numerous watercolour Painting Techniques, Textures in the Landscape and Textural Collage. 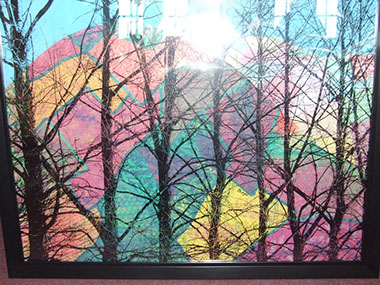 This is one of my mixed media textural collage paintings, it is called 'Surrounding Falmouth', and inspired by a view from a coach window...